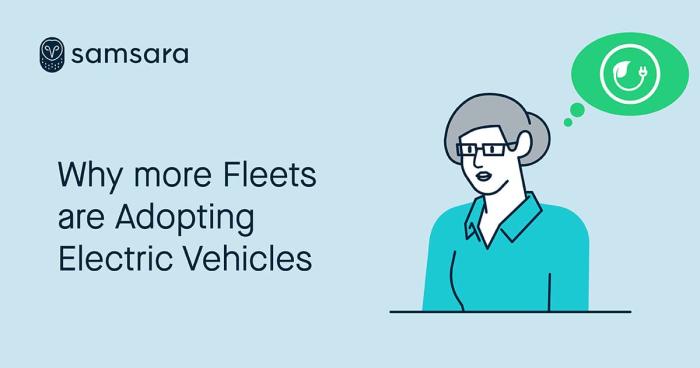 An overview of EVs and technology to make electric fleets more cost-effective, efficient, and manageable.

After a period of slow but steady growth, electric vehicles (EVs) are gaining momentum. By 2025, cars with electric motors will account for 30% of cars on the road, according to research by JP Morgan. By 2030, there will be 125 million of them, according to CNBC. By 2040, 57% of all passenger vehicles and 30% of fleets will be electric, forecasts Bloomberg New Energy Finance Ltd. (NEF). Other estimates from the International Energy Agency are even more bullish as the world moves more forcefully to reduce energy consumption and look for alternate energy sources including the electrical grid.

The EV has been around since the 1830s. They became popular during World War I when there were gasoline shortages and electrification was seen as a viable alternative. Subsequently, the technology had been all but replaced by the internal combustion engine until the turn of the 21st Century when concerns over fuel economy, pollution and global warming from co2 emissions and greenhouse gases prodded designers to look at alternative and renewable energy to power vehicles.

EVs from leading automakers include varieties of all-electric vehicles, vehicles with hydrogen fuel cells, plug-in hybrids, and hybrid models. Individual components within an EV are powered in different ways:

How are these EV components powered? All-electric and plug-in hybrid vehicles come with a charge port that is used to connect an EV’s traction battery to a power charging source. (Some EVs include hydrogen fuel cells that require hydrogen refills instead of electrical recharging.) An onboard charger monitors battery characteristics such as voltage, current, temperature, and state of charge while charging the battery pack.

The four main types of EVs include:

The Conventional Hybrid Electric Vehicle (HEV) includes both an internal combustion engine that runs on gasoline and other fossil fuels and an electric motor that engages at slower speeds. The electric motor is powered by a battery that is charged by regenerative braking, which, when engaged, puts the electric motor into reverse to slow the vehicle while also generating electricity to charge the car’s batteries. Popular models include the best-selling Toyota Prius.

The Plug-in Hybrid Electric Vehicle (PHEV) also has both gas and electric engines but it can be plugged into an electric outline or charging station to charge its electric battery. These vehicles are ideal for long journeys because the gasoline engine takes over if the battery charge runs down. Models include the Mitsubishi Outlander and the Volvo XC90.

The Battery Electric Vehicle (BEV) or all-electric vehicle includes an electric motor powered by a battery that is externally charged through plugging into a power source such as a charging station or basic electrical outlet. The electric motor and motor controller in a BEV relies on energy stored in rechargeable battery packs. Popular models include the Nissan Leaf and Tesla S Series.

The Fuel Cell Electric Vehicle (FCEV) is powered by a hydrogen fuel cell where compressed hydrogen gas is combined with oxygen to produce electricity to power the engine. FCEV vehicles (e.g., Toyota Mirai or Hyundai Nexo) rely on hydrogen fueling stations, which are currently in limited availability.

Why more fleets are going electric

Since 2008 there have been big advances in EV battery technology. Driving ranges have increased on a single charge and batteries have gotten smaller, lighter, and cheaper. Government mandates to lower vehicle emissions and variable fuel costs are also contributing to increasing interest in the EV.

For those considering EV fleets, there’s another benefit to add to checklists. A new generation of fleet management software brings unprecedented visibility into battery charge levels and charging resources. In short, the electric and hybrid fleet can now be managed using real-time data, GPS, and other technologies to significantly finetune fleet operations and help increase return on investment.

Managing and maximizing your fleet

Like any type of vehicle fleet, the electric fleet represents the rolling assets of your company, organization, or municipality. The goal is to maximize those assets. That means making sure that batteries never run out of power and that vehicles are performing optimally.

For example, drivers used to traveling 300 to 400 miles on a single tank of gas have to change their habits when driving EV vehicles with much shorter ranges. Since a dead electric battery can take over eight hours to fully charge, running batteries down and stranding vehicles or bricked vehicles is unacceptable and should be avoided at all costs. At the same time, electric vehicles have significantly lower maintenance costs making them optimal for reducing overall costs and maximizing utilization.

A recurring issue among EV fleets is that drivers tend to forget to plug in their vehicles at the end of shifts to recharge batteries. Another concern is that drivers don’t pay close enough attention to battery levels during shifts or allow ample time to reach charging stations before vehicle batteries are used up.

EV fleet management software provides real-time charging status and alert features. By combining real-time GPS location data together with a reporting dashboard, fleet managers can see in real-time the state of charge for each EV in their fleet—along with fuel levels for hybrids and conventional vehicles. Alerts can be configured and sent to drivers and centrally located fleet managers when batteries fall below a particular charging level. With this kind of proactive attention, dead batteries and stranded EVs can become a thing of the past.

Fleet management software brings data from each vehicle and EV charging stations in the area to remote managers. They provide insights into vehicle state of charge, alerts when battery levels are low, route planning features, performance energy, and visibility into charging history to modify inefficient behavior.

Visibility into individual EVs to keep track of battery charge and fuel levels is one feature. Getting to the closest charging/fast charging station as quickly and efficiently as possible to recharge batteries is another benefit of fleet management software.

Combining GPS location data with a map overlay, these solutions can display charging stations near where vehicles are located at any given time and along with their hours of operation and available charging infrastructure. This is an invaluable resource for drivers who otherwise might have to launch a search and then plot a route to a charging station themselves. Together with the alerts, EV route planning speeds time-to-charge by streamlining the process of getting vehicles to charging stations.

Historical reporting offers another tool for optimizing your fleet

Fleet management happens in real-time. EV fleet management software adds a historical reporting component that lets you extract and analyze fleet performance over time. You can use these insights on the fuel and energy usage of EVs, fuel vehicles, or plug-in electric vehicles and hybrids to:

With highly changeable energy costs, climate change mandates, the ability to make sure drivers are charging or refueling vehicles at the right time can lower costs. Understanding historical data on fuel and electrical usage can help managers and analysts see which vehicles are performing best within your EV fleet based on miles-per-gallon, miles-per-charge, and carbon emissions per vehicle.

These insights can be used to schedule maintenance, influence driver behavior to optimize fleet usage and performance, and for compliance reporting for government mandates.

When the smartphone was introduced, the worlds of mobile computing and telephony changed forever. Though impacting a smaller market, fleet management software for EVs is doing the same thing—changing in a big way how fleets are managed around the world using next-generation networking and software tools.

Right now, the EV market is getting ready to explode and EV fleets are playing a leading part.

New York City will convert its public buses to an all-electric fleet by 2040. A collaborative of mayors from around the United States — Austin, Aspen, Fayetteville, Jersey City, Los Angeles, and Phoenix — have all committed to purchasing light-duty EVs for their municipal fleets. There are global initiatives like EV100, bringing together forward-looking companies and customers committed to accelerating the transition to EVs and making electric transport the new normal by 2030.

The Samsara fleet management platform brings a new set of data-driven best practices to EV fleets. From battery charge and fuel tank monitoring to proactive refueling alerts, routing guidance, and the ability to gather historical performance data for analysis, insights, and reporting, Samsara covers all the bases. Whether your fleet provides transportation, delivery, maintenance, or emergency services, with Samsara it's fully connected to an intelligent system that focuses drivers, managers, and other personnel on getting the most from every vehicle.