What The Fuel Efficiency Standards Rollback Means For Fleets 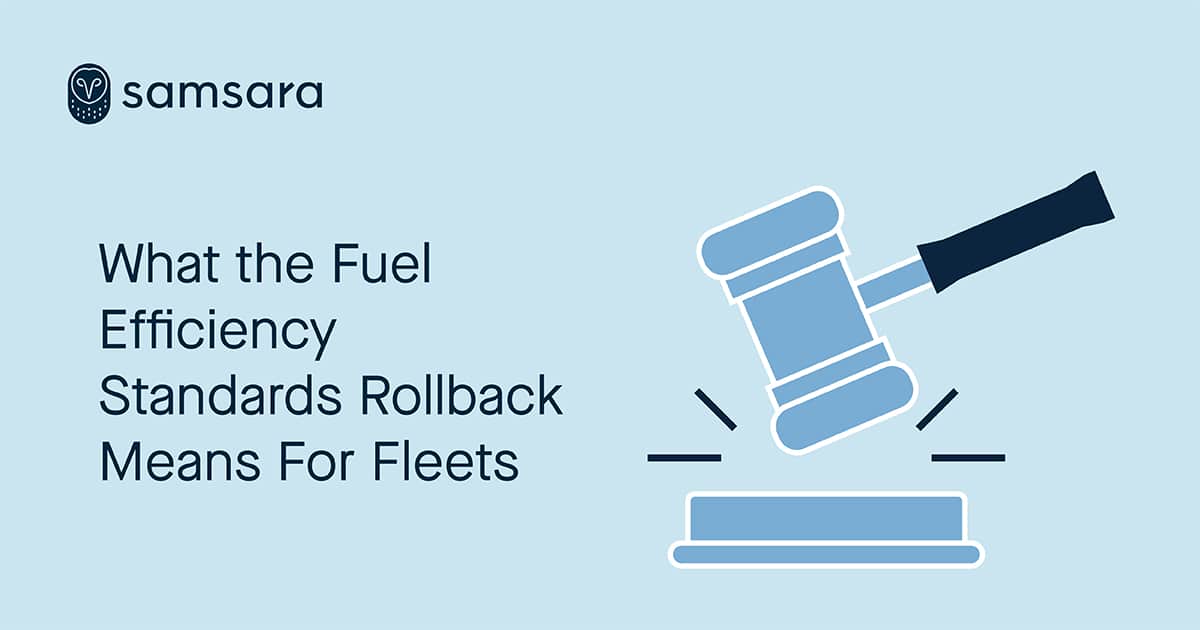 On March 31, 2020, President Donald Trump finalized his rollback of the Obama-era standards for auto efficiency, announcing a new rule that requires 1.5% annual increases in fuel efficiency. Under President Barack Obama's previous plan, automakers had to improve their fuel efficiency by approximately 5% annually. This meant that U.S. fleets would average 46.7 mpg by 2026.

While the new emissions standards target automakers, it also influences the way fleets can put fuel efficiency—or the way a vehicle extracts energy from fuel—into practice. The more fuel efficient a vehicle is, the better its  fuel economy is, or miles per gallon.

What is the difference between fuel efficiency and fuel economy?

Fuel efficiency and fuel economy are often used interchangeably. But, there are some important differences between the two concepts.

It's important to note that the relationship between fuel economy and fuel consumption is not linear. When low fuel economy vehicles make small improvements in their efficiency, they cause disproportionately large reductions in greenhouse gas emissions.

Why is fuel efficiency important for your fleet?

Fuel spend is the second-largest expense for fleets. Fuel spend equates to about 60% of a fleet’s annual budget, making fuel efficiency a big opportunity for cost savings. As a result, many fleet managers look for ways to reduce fuel consumption across their operations.

Fuel efficiency is an important consideration for fleets looking to improve their sustainability. Since 2016, transportation has outpaced the energy sector as America's largest contributor to greenhouse gas emissions.

Since consumers care about the carbon footprint of their purchases, fleets can gain a competitive edge with eco-friendly practices. Improving fuel efficiency and reducing greenhouse gas emissions leads to financial savings and it’s an ethical imperative for achieving long-term sustainability.

Daimler and Volvo recently announced a partnership to make fuel cell technology available and feasible for heavy-duty trucks as an alternative to traditional fuels. With automakers developing more efficient technologies, fleets will be able to combine them with better sustainability practices for the most savings.

Real-time analytics into driver and route performance can help you adopt efficient operations. Fleet managers can identify ways to optimize fuel consumption by monitoring driver behavior and seeing how fuel is used.

Comprehensive telematics solutions offer all-in-one dashboards that highlight areas where you can coach drivers to be more efficient. Fuel efficiency monitoring can lead to marked improvements in fuel consumption—without the need to buy a whole new fleet.

For example, Samsara has empowered businesses like Dohrn Transfer Company with access to real-time fuel usage. Dohrn uses the Samsara Dashboard to implement a targeted driver coaching program that has helped cut idling by half.

A brief history of CAFE standards and fuel economy regulations

The influence of fuel efficiency regulations and rollbacks dates back to legislation from the 1970s. In 1973, the United States oil embargo led to widespread fuel shortages that prompted Congress to try to decrease American dependence on foreign oil.

To do this, Congress established the Corporate Average Fuel Economy (CAFE) standards in 1975. These standards are regulated by the National Highway Traffic Safety Administration (NHTSA), a division of the Department of Transportation.

The act required automakers to meet a minimum fuel efficiency gain across each model year. The aim was for passenger vehicles to reach 27.5 mpg within the decade. Passenger cars and light trucks (SUVs, pickups) needed to improve efficiency in line with the annual mpg gains, or automakers would face steep fines.

The act marked a regulatory shift for the auto industry—one that rewarded safer, affordable, and fuel-efficient vehicles and mandated efficiency reporting.

In a similar ruling, Congress established the Clean Air Act in 1970. This law protected Americans and the environment from the harmful effects of air pollution. It required the Environmental Protection Agency (EPA) to regulate emissions for dangerous pollutants and to preserve public health.

In 2007, the Supreme Court ruled that carbon dioxide and other greenhouse gases were considered air pollutants under the Clean Air Act. The EPA formally began regulating greenhouse gas emissions in 2009.

However, this put the EPA in conflict with the NHTSA when setting emissions standards. To complicate matters, in 2002, the California Air Resources Board began setting their own stricter regulations in California.

To consolidate regulations, the Obama administration updated CAFE standards for the first time in decades. This led to the National Program, which established consistent federal standards in collaboration with the EPA, NHTSA, automakers, and the State of California.

The new standards required 5% annual increases to fuel efficiency through 2026. This would lower fuel costs, create jobs, and combat global warming. In 2018, President Trump announced his plan to revise Obama’s CAFE standards. The Trump administration enacted the Safer Affordable Fuel-Efficient Vehicles (SAFE) rule, also known as the “final rule,” in March 2020. This revised the CAFE standards to require only a 1.5% annual increase to fuel efficiency. There was also the ability to cut back further if the requirement was too strenuous.

Consequences and penalties for CAFE violations

CAFE standards don’t directly punish fleet operators, but they impact fleets in other ways. CAFE standards generally penalize automakers $5.50 per 0.1 mph over the regulated standard for their fleet, multiplied by the number of vehicles in that fleet.

By 2014, automakers had paid out $890 million in CAFE penalties, incentivizing them to improve fuel efficiency performance in their vehicles.

CAFE restrictions went into effect for heavy-duty trucking in 2018. These restrictions influence the design and sale of new trucks and trailers. This means that fleets can continue to use their existing vehicles, but may want to upgrade them to improve fuel efficiency and lower costs.

Automakers are incentivized to take advantage of hybrid fuels and can use credits from AC efficiency improvements to offset fuel efficiency as needed. So even if newer vehicles don’t have better engines, they should offer improved fuel economy. These vehicles may cost a bit more upfront but are expected to net savings for fleet operators through lower fuel costs.

The lowest fuel spend comes from a combination of efficient vehicles and good driving practices. When fleet operators can visualize and tackle their largest inefficiencies, fleets can improve and save money. That’s where fuel monitoring comes in.

Dohrn Transfer Company uses Samsara to implement marked gains in efficiency. Insights provided by Samsara tools have contributed to a 2% improvement in Dohrn’s annual mileage per gallon usage. This equates to about 150,000 fewer gallons of fuel.

Over time, this reduced spend means that commercial fleets can redirect their spending towards innovation and more efficient vehicles that meet the current year’s CAFE standards.

The future of fuel efficiency regulations

Whether the Trump administration’s Safer Affordable Fuel-Efficient Vehicles rule holds or gets overturned by the EPA, commercial organizations must prepare for evolving regulations and fuel economy standards.

Fuel monitoring solutions can help your business comply with such regulations by providing visibility into the fuel economy performance across your fleet. Additionally, monitoring helps you target individual vehicles for maintenance and driver training to improve your fleet’s overall fuel efficiency.

If you’re looking to improve your fuel efficiency, reach out to us for a demo or free trial today.