“With Samsara we’re able to identify fuel usage, speeding, harsh events, and power take-off. There are so many things we can capture in one system.”

City of Fort Lauderdale, the largest city in Broward County, Florida, manages over 1,700 vehicles in its fleet across multiple city departments. The fleet department is responsible for all vehicle-related needs and works closely with 11 departments to support city services for residents and visitors, including public works, parks and recreation, police, and fire rescue. 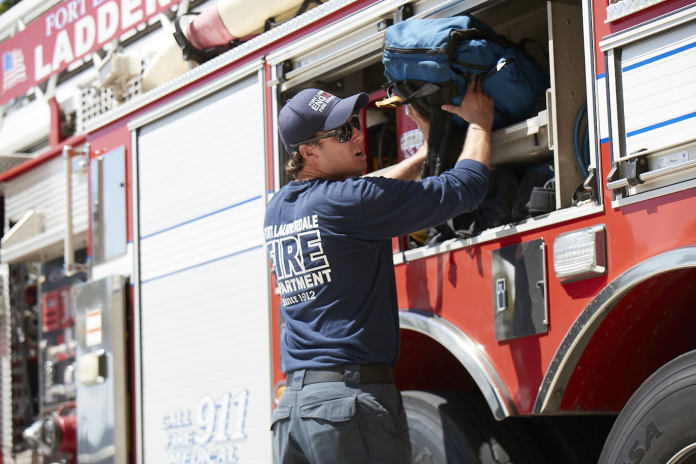 When the city manager launched an initiative to lower emergency response times and improve visibility into the city’s first responders, the fleet department started a search for a real-time GPS solution. Through their evaluation, they recognized the need for a solution beyond just GPS-based vehicle location—a complete platform solution that would also provide insights to maintenance and driver behavior with robust reporting capabilities. “With Samsara we’re able to identify fuel usage, speeding, harsh events, and power take-off,” said Sandy Leonard, Program Manager of Fleet Services at the City of Fort Lauderdale. “There are so many things we can capture in one system.”

Before implementing Samsara, the City of Fort Lauderdale’s fleet department did not have tracking in place for its non-emergency vehicles. The team relied on phone calls to locate and then dispatch workers.

With the transition to Samsara, all departments can now track their vehicles in real time, making it easy to dispatch teams quickly and efficiently, whether it be an emergency response situation or a citizen call for water meter services. Increased visibility into the fleet has also helped the City of Fort Lauderdale better respond to resident inquiries or complaints, significantly improving their service.

“Samsara gives us accountability on the fly,” said Drew Newstrom, Automotive and Equipment Specialist. “Before, if we got a call that a city vehicle was speeding or driving recklessly, all we could say was 'we’re sorry.' We couldn’t give them a response. Now I can look to see which vehicle was there, who was driving the vehicle, and make sure it doesn’t happen again.” 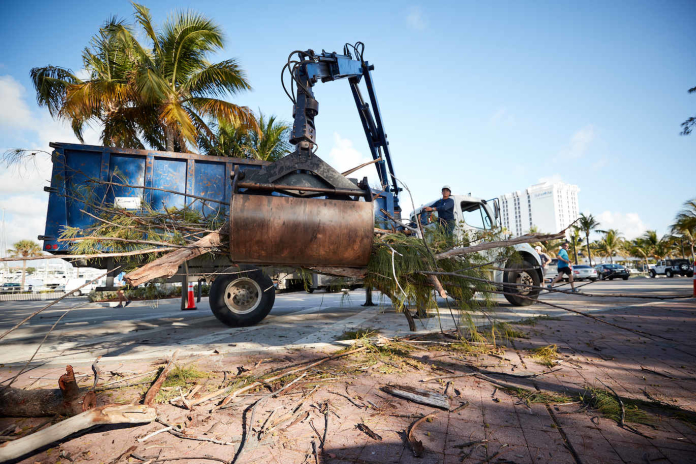 Coastal living also means managing the clean-up after storms or hurricanes. Tree canopies are very vulnerable in these storms and damage to branches can lead to major blockages on roads. When ocean water washes ashore from a storm, the sand and debris left behind can make the roads unusable. Following Hurricanes Matthew and Irma, Leonard remembers responding to citizen calls that their neighborhood hadn’t been cleared. The team already has plans to be ready for the next storm, and will be relying on Samsara’s real-time GPS to keep close tabs on fleet location.

Tracking heavy vehicles to save a bridge

Samsara also helped the city solve a major citizen complaint: constant closures of a commonly trafficked, historical bridge for maintenance due to over-weight-limit vehicles crossing the bridge. The nearly 100-year-old Snow-Reed Swing Bridge detaches from the banks in order to let marine vessels through and has a sensitive locking mechanism. In a typical fall season, the bridge was closed for two to three months due to maintenance, forcing citizens and visitors to take a three-mile detour.

“Residents living in that neighborhood were very upset. The bridge would be closed for a while, then open again for a couple days, then be down for weeks,” said Newstrom. 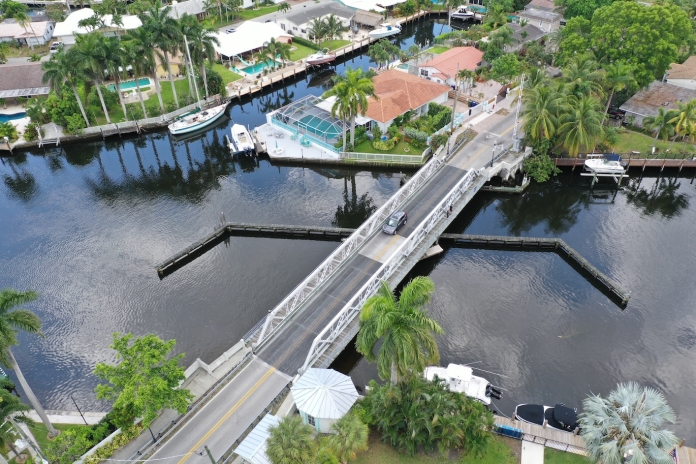 While city workers would all say they didn’t drive heavier vehicles over the bridge, Leonard and Newstrom decided to see how much their fleet was contributing to the closures. They leveraged Samsara to tag all city vehicles that exceeded the bridge’s 5-ton weight limit and used a geofence to determine how often heavy city vehicles were crossing the bridge. This kind of reporting, combined with Samsara’s real-time alerts, allowed the parks and recreation and fleet departments to monitor and decrease the number of the city’s overweight vehicles crossing the bridge by 90% within five months.

Maintenance is a top priority for the fleet department: keeping vehicles in good condition means they are available to respond to city needs right away. Before implementing Samsara, Newstrom’s team had little visibility into fleet health and depended on drivers to self-report potential problems. Unfortunately, most drivers wouldn’t bring in a vehicle until it was too late.

Samsara’s live engine diagnostic information allowed the City of Fort Lauderdale to see engine faults across their fleet in real-time and more quickly diagnose maintenance issues. This increased visibility allowed the team to make better decisions about maintenance and extend the health of the fleet.

“Having engine data in the dashboard gives us better information to make better decisions,” said Leonard. “When we see an engine fault come through, we notify the appropriate department and ask them to bring the vehicle in for repair. Doing that helps prevent additional damage from occurring and reduces downtime.” 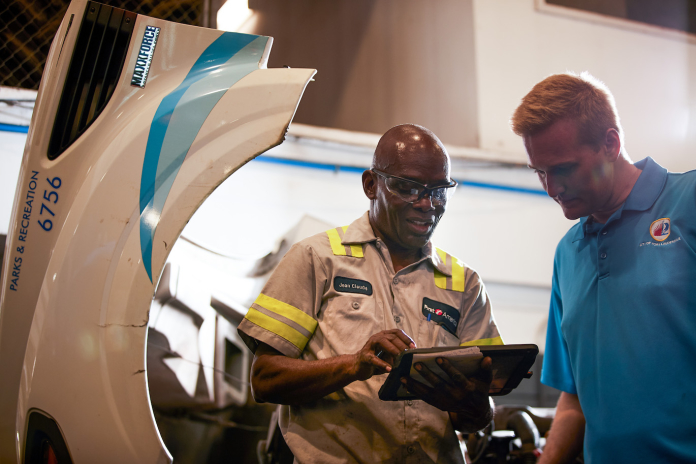 Knowing this information ahead of time also allows the team to increase efficiencies with scheduling.

“If a vehicle is in the shop, it’s not out there working,” said Newstrom. “With a vehicle like a street sweeper, if the issue isn’t critical, we’ll have them finish their shift and drop it off with us. We’ll work on it overnight and they come pick it up in the morning to get it back on the road.”

As a result of this new visibility, the team was able to reduce average vehicle downtime by 28% and reduce the average number of vehicles in the shop by 24%.

“Samsara helps the city be more efficient,” said Newstrom. “We can more efficiently use older vehicles as well by reducing downtime so that they’re actually on the streets helping people, doing the right thing—trimming trees and repairing pipes or any other services our residents need.”

Increased visibility into fleet health and activity also allowed the City of Fort Lauderdale to reduce idle time by 20%. Newstrom leveraged the Samsara Fuel Usage Report to see how much fuel was being used and paired this with driver behavior data to help supervisors coach their teams on best practices for fuel-efficient driving.

So far, the fleet department has decreased fuel consumption by 5%—even as the fleet grew. This is the equivalent to 28,000 gallons of fuel saved, about $70,500 in savings over a six-month period.

The police and fire rescue departments are tasked with emergency preparedness. Because the City of Fort Lauderdale experiences average temperatures ranging from 60°F to 90°F, they have to take safety precautions both with medications in emergency vehicles and with their police dog K9 units.

The city’s fire rescue team stocks their ambulances with medications needed for emergency situations, and the vast majority of these medicines are temperature sensitive. NARCAN, for example, is a drug designed to rapidly reverse an opioid overdose. In order to be effective, it must be kept at room temperature—anywhere between 59°F and 77°F. To ensure NARCAN and other medications are kept within safe temperatures, the City of Fort Lauderdale uses Samsara environmental monitors. This allows them to track the drug storage environment inside their vehicles to make sure the medications are within the proper temperature range.

The police department is also committed to temperature-related safety, especially when it comes to their canine partners. To make sure that police dogs in the K9 units are safe in the back of the police vehicle, they’ve installed temperature sensors to prevent the dogs from overheating. The team has also set up “hot dog alerts” to receive instant notifications if it gets too warm for the dogs so their human partners can take action immediately.

The City of Fort Lauderdale is looking forward to elevating new city services and providing increased visibility into taxpayer investments.

To share the real-time location of the city's new tram, the fleet department is in the process of setting up a Samsara Live Sharing link. This feature will allow residents and visitors to easily check the status of the next arriving tram, so they can easily coordinate next ride down to the beach or downtown area.

The team is also expanding into asset tracking to better manage the city’s equipment and other assets. With this data, the City of Fort Lauderdale will be able to track asset usage and location with the same granularity as their fleet.

“Awareness was our biggest challenge—we just didn’t know what was happening,” said Leonard. “We have that visibility now with Samsara and we’re able to change behavior. This is huge.”