A Quick Guide to the History of Electric Vehicles 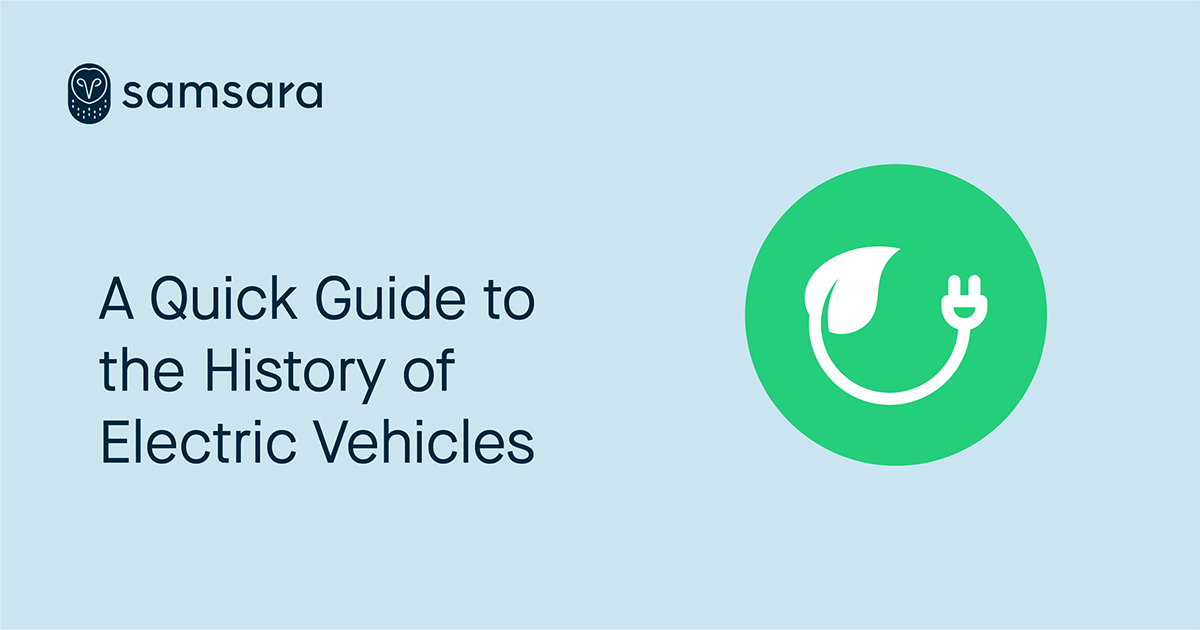 As electric vehicles grow increasingly widespread on the roads, it is important to look back at their long history of innovation. Read about how far this technology has come over the years, and where it is now.

The History of Electric Vehicles

Electric vehicles (EVs) are on the rise due to rising fuel costs, improved battery technology, and stricter environmental policies. Today, EVs like the Tesla Roadster and the Nissan Leaf are well-known and popular among consumers. According to Bloomberg New Energy Finance, EV sales had increased from 450,000 in 2015 to 2.1 million in 2019. Experts expect this number to continue growing as automakers shift their focus from internal combustion engine (ICE) vehicles to EV production. Over 500 different EV models are projected to be available by 2022.

While EVs have gained recent popularity and adoption, they were created over 100 years ago. Read on to learn more about the history and evolution of EVs and their effect on the world.

What is an electric vehicle?

Unlike a traditional internal combustion engine (ICE) vehicle that uses gasoline or diesel, an EV uses electricity as an energy source. EVs rely on lithium-ion batteries and lead-acid batteries for their electricity. To refuel, most only need to visit a charging station to recharge their batteries, which can provide up to 200-300 miles of driving per single charge. EVs emit fewer greenhouse gases than gasoline engines, with fully-electric vehicles emitting none at all.

There are three basic types of EVs. Each type relies on electricity to a different degree.

For a more in-depth look at electric and hybrid vehicles, check out Samsara’s Complete Guide to Electric Vehicles for Fleets.

The birth of the electric vehicle

EVs would not exist without the invention of the electric motor, which existed as far back as the early 19th century. Several scientists constructed electric motors to power small, battery-powered model cars. Later, scientist Robert Anderson designed larger motors for electric locomotives and electric carriages. Unfortunately, these machines were not very practical because of the power limits of their batteries. However, such advancements showed the electric motor’s potential for powering vehicles.

American chemist William Morrison developed the first electric car in 1890. It held six passengers and had a top speed of 14 miles per hour. While it was essentially an electric wagon, the car resulted in greater interest and advancements in EVs.

The development of personal vehicles helped spur the great popularity of early EVs. Consumers were turning to newly-invented motor vehicles as an alternative to horses. These early vehicles were powered by steam, gasoline, or electricity. However, steam vehicles had a long startup time and needed refilling with water often. The gasoline car was hard to operate due to its gears and hand crank. It was also noisy and emitted an unpleasant exhaust. These disadvantages made both technologies unpopular.

But early EVs had none of these issues. They were quiet, easy to operate, and did not produce unpleasant emissions. EVs were especially widespread in urban areas because their range was appropriate for brief trips around the city. EV charging also became much easier as electricity grew more accessible. These factors caused EVs to have a “golden age” at the start of the 20th century.

By the early 1900s, EVs had grown in popularity. A third of vehicles on the road were electric, and a transportation business in New York City used a fleet of over 60 electric taxis.

The fall of the electric vehicle

After a period of popularity, EVs experienced a decline in the 1910s. Engineers like Thomas Edison and Henry Ford saw greater potential in the gasoline car and shifted their focus to it. In spite of their difficulties, gasoline cars still outranged and outsped EVs. Also, due to the discovery of large petroleum reserves, gas prices dropped, making gasoline cars cheaper to operate than EVs.

Consequently, gasoline cars saw many developments. The difficult hand crank was replaced with Charles Kettering’s electric starter, making the vehicles much easier to operate. Invention of the muffler reduced engine noise. Henry Ford’s mass-produced Model T brought gasoline cars’ price down to less than half of an EV’s price. Over time, the price of gasoline cars fell even further, and the price of EVs continued to rise.

By the 1910s, most EV manufacturers had stopped production. Until the 1960s, EVs largely remained obsolete, while ICE vehicle development progressed at a rapid pace.

Despite the public’s renewed interest, EVs made in the 1970s were still slow with limited range, remaining impractical compared to ICE vehicles. Automakers improved them in the 1990s, when there was another surge of interest in EVs due to government sustainability regulations. Car companies made electric versions of their popular models, resulting in improved performance comparable to ICE vehicles. However, consumers’ interest declined once again, although research on EVs continued.

In 2000, the Toyota Prius launched worldwide as the first mass-produced HEV. Its success resulted from consumers’ greater environmental awareness and high gasoline prices. From 2000 to 2010, The Prius was the world’s best-selling HEV and paved the way for modern EVs.

In 2006, a startup company in California called Tesla Motors announced the production of a luxury BEV able to cover over 240 miles with a single charge. Named the Tesla Roadster, it was released in 2008 to great success. Other major automakers also sped up their production, with the Nissan Leaf and Chevrolet Volt releasing in 2010. Like the Roadster, the Leaf was also a BEV, while the Volt was the first PHEV on the market.

Though consumer interest remained high and automakers continued to produce EV models, EVs remained less accessible due to the limited availability of charging stations. To address this issue, the Department of Energy, automakers, and other businesses installed 8,000 charging stations across the United States. Improved battery technology also increased the range of EVs while lowering their prices, making them more affordable and accessible.

Currently, there are a wide variety of EV models available on the market, ranging from SUVs like the Tesla Model Y to sports cars like the BMW i8. With gas prices rising and EV prices falling, large numbers of consumers and businesses are now turning to EVs as a greener alternative.

In the past two decades, the electric vehicle has seen significant developments that have affected the technology greatly. Below is a timeline of modern EV milestones:

General Motors releases the EV1. It is the first mass-produced modern BEV from a major automaker. While the EV1 was popular with customers, GM eventually destroyed most of them, believing that they were unprofitable.

Silicon Valley startup Tesla Motors delivers the first Tesla Roadster. It is the first highway legal BEV to run on a lithium-ion battery, and the first to have a range of over 200 miles per charge. While it was in production from 2008 to 2012, Tesla sold around 2,450 Roadsters in over 30 countries.

The Tesla Model S is released to great acclaim. It receives many awards, such as the 2013 World Green Car of the Year and the 2013 Motor Trend Car of the Year. Time Magazine includes it in its Best 25 Inventions of the Year 2012.

The Tesla Model 3 is launched. As of March 2020, the Model 3 is currently the best-selling BEV in the world. To date, Tesla has delivered more than 500,000 units.

Tesla, Inc. produces 1 million electric cars — the first automaker to do so.

Why invest in electric vehicles for your fleet?

While EVs have been historically popular as a personal transportation method, they also bring many benefits to fleets. Their low or even zero emissions let fleets stay compliant with government mandates and meet their carbon emission goals. Thanks to being lighter and using a less flammable power source, EVs are safer than ICE vehicles. Some manufacturers have placed EV batteries in safer parts of the vehicle to reduce the risk of fire during a collision.

Also, EVs are a cost-efficient alternative to ICE vehicles. Modern EVs’ improved battery technology and greater driving range allow them to perform similarly to ICE vehicles while saving on fuel costs. A report by the US Department of Energy shows that BEVs and PHEVs have a typical energy cost of $50-80/month, in contrast with $160-200/month for ICE vehicles. EVs are also relatively less prone to maintenance issues, reducing costs of maintenance and repair.

Innovative EV fleet management platforms like Samsara allow you to monitor your EV fleet’s condition. They can reduce range anxiety with real-time information and alerts, ensuring that EVs are charged properly. With real-time data, GPS, and other technologies, these platforms offer various features that maximize an EV fleet’s efficiency. For example, Samsara’s platform includes optimized EV route planning so drivers can get to the closest charging station quickly.

Today, EVs have come a long way since Morrison’s first electric car, surpassing even more recent models like the Toyota Prius. The rapid advancement of EVs has resulted in efficient green alternatives like the Tesla Model 3 that change the way we think about transportation and energy. As EVs and their associated technologies become more advanced and widespread, they will become as functional and accessible as ICE vehicles.

With their environmental benefits, EVs are just as important to commercial fleets as individual consumers. Fleets can take advantage of EVs to lower both fuel costs and emissions while staying environmentally friendly. Samsara’s EV-specific tools help you transition to an electric fleet and help you monitor and manage your EVs.

To learn more about EV fleets and Samsara’s EV fleet management platform, reach out for a free trial today.