“Video retrieval with our old system took 1-2 weeks, but with Samsara we get footage right away.”

Nationwide oil & gas piping construction company with more than 1,200 vehicles relies on Samsara dash cams and real-time GPS tracking to keep crews safe and efficient out in the field.

As a leading provider of engineering, fabrication, maintenance, and construction services for oil and gas producers, KS Industries (KSI) operates at a massive scale across six of the largest energy-producing states in the United States. In particular, they build and maintain oil and gas facilities for their customers, which include Chevron and Hess Corporation. Because they operate at the cross-section of oil & gas and construction—two of the most dangerous industries in the world—KSI is first and foremost concerned with safety.

Leading their safety department is Phillip Clarke, Director of Safety and Risk Management. “In our industry, safety is absolutely paramount,” said Clarke. “When I started at the company, they told me that we’re a safety company that does construction.”

KSI’s operations span California, Colorado, New Mexico, Texas, Wyoming, and North Dakota. With more than 1,200 vehicles and 1,000 drivers to manage, Clarke and his team of 36 employees are tasked with keeping KSI’s crews safe out in the field. Because of the breadth of their operation, they needed dash cams with fast video retrieval and superior real-time telematics to gain better visibility into their remote crews.

Often spanning over hundreds of square miles, most oil fields look like a moonscape: barren, deserted, and remote. The industry also has one of the highest percentages of annual workplace fatalities, and—perhaps surprisingly—according to the National Institute for Occupational Safety and Health, the majority of injuries and fatalities in the oil and gas industry are tied to transportation in light-duty vehicles.

With more than 1,000 drivers to track—mostly driving light-duty vehicles—Clarke needed a system that allowed his team to monitor the real-time GPS locations of their drivers and supervisors out in the field. “Our former system had a 100-vehicle limitation for what you can see on the live map,” said Clarke. Lack of connectivity was also a challenge out in the field with their former system. “Samsara’s technology is so much better. We no longer have dead spots in the field and the dashboard is much easier to read.”

Now, Clarke and his team have one dashboard to view all of their vehicles across all of their geographies, which saves time and improves visibility into their entire fleet. Tracking crews more easily for rescues and giving directions to lost drivers has been one of the biggest benefits, Clarke said. “The oil fields are expansive and it can be very hard to find people,” said Clarke. “We like to know at any given moment where our crews are.”

The real-time GPS data plays a big role in making sure that safety supervisors are monitoring the fields in accordance with KSI’s requirements. “We expect our safety team and our supervisors to be out in the field 90% of the time,” said Clarke. Now, Clarke is able to geofence custom areas of their job sites to determine whether the supervisors are spending sufficient time in the field. Meanwhile, the supervisors can now find everyone they need to talk to.

Just recently, one of KSI’s executives was trying to track down a driver on one of their Chevron leases in New Mexico. With the help of Samsara’s real-time GPS location data, Clarke was able to give him turn-by-turn directions remotely from California so the executive could locate the driver onsite and check in with him. 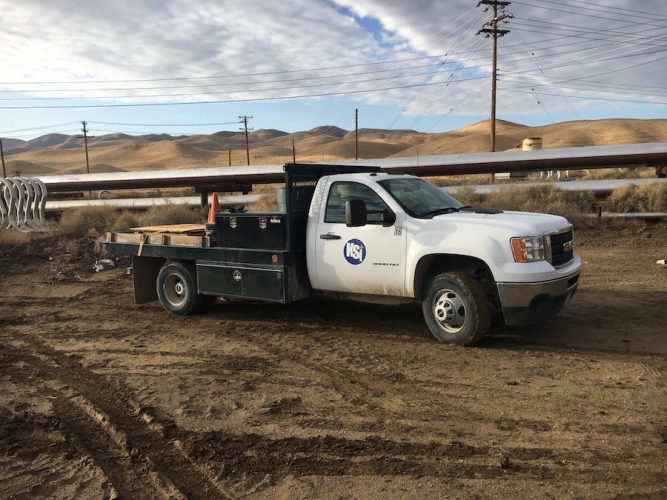 “We want our supervisors and safety professionals to touch each one of our crews at least once daily, and now we have the ability to know where they are,” said Clarke. “When you’re out there it’s not easy, it’s very confusing and congested in places.” These touchpoints not only ensure safer sites, but also improve morale for the crews. “We’re big on being hands-on here and when we get the senior leadership out there it helps reinforce the safety message to our crews,” said Clarke.

Increasing productivity with reliable connectivity in the field

The lack of connectivity KSI previously experienced also took a toll on productivity. Because a lot of KSI’s oil fields are remote, drivers often can’t get a cell signal. This makes it difficult to upload documents electronically, causing significant processing delays in critical paperwork such as Standard Operating Procedures (SOPs) and supervisor safety audits. Audits and documents such as these are critical because they ensure the safety of KSI’s equipment on the job site.

“One of the biggest things for us was connectivity. We had a lot of issues in the past because we work in very remote areas.”

“We do a lot of our job site forms electronically, and we access our SOPs electronically. But, our guys weren’t getting any connectivity out in the field,” said Clarke. With the WiFi hotspot built into the Samsara Vehicle Gateways, KSI gained reliable connectivity, enabling teams to send SOPs and audits back to HQ from the field. “With Samsara, we’ve reduced our cellular bill, and also now we’re able to get our safety metrics in real time.”

Because their former telematics and dash cam system lacked necessary functions to coach drivers, KSI had few users reviewing incidents and monitoring driver behavior. And without executive-level awareness from the KSI leadership team and adoption from the safety team, many unsafe driving behaviors went undetected. This meant that Clarke and his team had difficulty coaching drivers, changing behaviors, and preventing accidents.

After implementing Samsara, Clarke began promoting the new platform at company meetings with his senior leadership team to bolster his safety efforts and get more administrators engaged. Now, Clarke says, because of the simplicity of the Samsara platform, there are more safety managers on the platform actively reviewing footage and being more vigilant about monitoring unsafe driving behaviors. “There’s a lot more engagement and a lot more usage with Samsara,” said Clarke.

Because workers in the oil and gas industry often work long hours through harsh conditions and dangerous sites, they experience 5-times higher workplace fatality rates than the rest of the world’s full-time workforce. Without a way to consistently monitor driver behavior, unsafe driving behaviors—like driving without a seat belt, one of the biggest factors in oil field fatalities—can be difficult to improve. In the past, Clarke could only review footage when it was triggered by a crash, and dash cam video retrieval took one to two weeks. This not only prevented the safety team from proactively monitoring everyday driving behavior but it also slowed things down during instances when response time was critical.

With Samsara dash cams, Clarke and his team review footage the same day, and they can spot check video footage for safe driving behaviors, like wearing seat belts and avoiding distractions. This newfound ability to spot check their drivers gives Clarke’s team the peace of mind that their drivers are being safe out in the field and enables them to coach drivers on safe driving techniques to avoid future accidents.

As a contractor for oil and gas companies, KSI’s vehicles have a bill back rate when they’re onsite with their customers. Because they have so many vehicles, tracking when and where each vehicle is and what customer they’re servicing used to be a big challenge for KSI.

A few KSI executives noticed a gap in the bill back rate for their vehicles due to the manual nature of their old system, which meant they were missing out on earned revenue. “We discovered we were not billing for a lot of our billable vehicles,” said Clarke.

Thanks to Samsara’s reliable GPS data and proximity search—which allows admins to look up which vehicles were at a location at a specific time—KSI was able to increase their billable hours by proving that their vehicles were onsite doing work for their customers at certain times. By leveraging the Samsara open API, Clarke was able to match billing data with vehicle usage to investigate discrepancies between billed and billable hours, which increased revenue for the company.

Learn how Delta Constructors uses the entire Samsara platform to connect their operations and improve efficiency at scale.

Learn why Liberty Oilfield Services partnered with Samsara to improve the safety, efficiency, and sustainability of their...