“Samsara allows the MBTA to be more accurate in our bus schedule predictions so that our riders have better faith in our service.”

Siobhan Cunningham, Head of Projects at the Customer Technology Department for the MBTA

As one of the oldest public transit systems in the United States and the largest in Massachusetts, the MBTA is familiar with embracing technological change. In fact, the state’s first mass transit system dates back to the year 1630 with a ferry transporting passengers across the famed Boston Harbor.

With 1,050 buses that span over 177 different routes, the MBTA’s bus system accounts for just over 32% of the total MBTA ridership across subway, commuter rail, bus, and ferry systems. The MBTA bus system transports over 450,000 passengers to more than 51 municipalities in the greater Boston metro area on weekdays alone, and its expansive ridership makes it the sixth largest bus system in the United States. But with so many daily riders spanning so many different routes, it can be challenging to predict schedules and on-time performance.

That’s why when Siobhan Cunningham, Head of Projects at the Customer Technology Department for the MBTA, began to notice that the agency’s reliability scores were dropping and the bus predictions were inaccurate, she turned to Samsara.

We all know the feeling of waiting for a late bus. First, it’s only two minutes delayed. Then, it jumps up to five and suddenly the bus isn’t coming for another 10-15 additional minutes. Sometimes, the bus never shows up, or the display sign stops updating.

The MBTA was no stranger to this problem. Passenger reliability scores were low and customers were losing confidence in the bus service because the MBTA was unable to accurately predict arrival and departure times. The MBTA’s legacy software could only provide GPS location data every 60 seconds, and even then, the ping rate was often delayed because the system was frequently interrupted by radio chatter from the bus operators. This often led to delays of three minutes or more in location information, which caused inaccurate predictions and lapses in service across the city.

David Block-Schachter, former CTO at the MBTA, described in an article on Medium how these inaccuracies can quickly spiral. “If a bus is stopped for five minutes because of an issue, the operator is usually on the radio with dispatchers at the control center,” Block-Schachter said. “From our system’s perspective, though, the bus could still be moving—bus drivers use their radios while driving, too. All we know is that the location was last updated five minutes ago. So from a predictive standpoint, we think it’s five minutes closer to you, which is inaccurate.”

"Now, we can prove our buses’ locations down to the second, which helps us improve our service to our customers."

With routes that include 20+ stops, each delayed minute adds up. Not only does poor predictability lead to a drop in ridership, but it can also lead to millions in lost revenue for cities. That’s why the MBTA chose to deploy Samsara’s Vehicle Gateways (VGs) and leverage the Samsara open API to improve predictability and rider sentiment. Now, their buses are equipped with a reliable real-time GPS system that provides live-to-the-second location information.

How does it work? First, the Samsara VG captures and tracks the real-time GPS location data of the bus. Next, the Samsara open API feeds the bus location data to the MBTA’s prediction software to ensure accurate location information. This data is then used to share ETAs via signs at bus stops as well as public transit mobile apps. In addition, Samsara allows the MBTA to communicate to their passengers via rider apps so that riders can track the location of their bus in real-time.

Since implementing Samsara, the MBTA has seen a 10% increase in their buses’ predictability. This is particularly beneficial because of the connection between predictability and ridership. In fact, studies of the New York and Chicago public bus systems have shown that real-time arrival information can boost ridership by over 2%, which when aggregated amounts to over $6 million in revenue gained just three years.

Historically, the MBTA’s buses were not able to relay location information to the bus control center during the underground portion of the route because there was no radio or satellite service. This lapse in location data caused significant errors in predictions and on-time performance calculations for the MBTA’s buses traveling to and from the airport.

"With real-time data, we could improve the quality of our predictions — no more waiting five minutes for a bus that says it’s only two minutes away."

To improve service predictability on these routes, the state’s Transportation Agency MassDOT partnered with a third party, crowd-sourced GPS-navigation app to install more than 850 Bluetooth beacons in the city’s highway and transitway tunnels. Powered by the built-in Bluetooth capabilities in Samsara’s Vehicle Gateways, the MBTA is now able to continue tracking bus locations underground, which enables more accurate predictions for passengers and dispatchers. 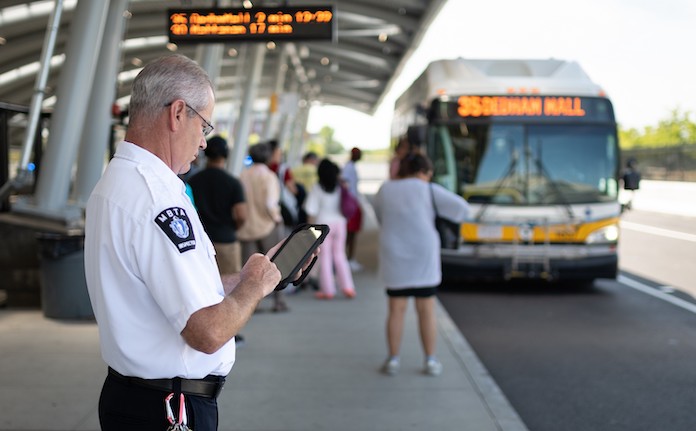 In addition to breadcrumb GPS data, the MBTA’s legacy system was cumbersome for dispatchers, often leading to confusion at terminal stations and delays in service.

At the MBTA, dispatch is controlled centrally through the Operations Control Center. But to supplement dispatch, they also use on-the-ground bus inspectors to route buses at terminal stations during times of heavy traffic or delays. For example, when traffic is particularly bad, the bus inspectors instruct buses to express halfway up the route to ensure people are picked up at their stop on time. This way, the MBTA can ensure that enough buses are coming back on the return route so that those passengers don’t face major delays.

Until recently, the bus inspectors had limited visibility into the real-time locations of the buses and had to rely on the Operations Control Center’s sporadic radio access to make dispatching decisions. Now—using new mobile tablets powered by real-time information from Samsara’s open API—bus inspectors can quickly access more accurate location data for their buses in the field. With increased access to this data, bus inspectors are able to see traffic problem areas before they cause significant disruptions in service.

The MBTA’s customer support center works directly with the city’s residents to resolve any service complaints. Often, customers call the support center to notify them that a bus didn’t arrive at their stop or was late.

Before Samsara, the MBTA’s unreliable location data made the process of proving their vehicle locations complicated. Now, support center employees are able to use data to legitimize the complaints or respond with confidence that their service was operating as intended—making the process more streamlined. If a customer complains, a support employee can look up the trip history of the bus and route to determine if it made the stop or not, thanks to Samsara’s reliable GPS tracking and intuitive dashboard.

This can also be useful for driver coaching. “If we see that a bus did miss a stop, we can look up who was driving that bus and figure out exactly what happened,” Cunningham said.

"Samsara’s intuitive interface has radically improved our customer center’s ability to respond to customer complaints about whether or not a bus stopped at their stop."

With their new ability to back up their service, the MBTA is now able to prove their reliability to their citizens to improve customer sentiment. So far, Cunningham has noticed a visible difference in the attitudes of the customer center employees. 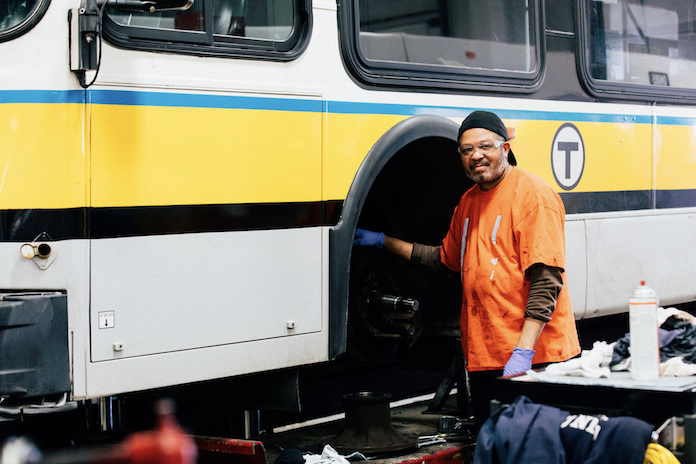 With more than 15 bus yards spread across the Boston metro area, the MBTA’s maintenance crew is responsible for keeping the transit system’s 1,000+ buses running smoothly everyday. Without an efficient way to track the engine health and locations of their buses, the maintenance crew was wasting valuable time searching for and diagnosing vehicle maintenance issues.

Before Samsara, Joe DiPrimio, Bus Maintenance Training Instructor, and his team would spend hours searching for buses in their yards or on the roads. When a bus would break down on a route, the bus driver would radio in and give its approximate location—but location descriptions from the drivers were often not entirely accurate. DiPrimio and his team might spend one to two hours searching for the bus. “Samsara’s GPS helps the maintenance team with road calls, especially when they receive bad location descriptions,” said DiPrimio.

"Before Samsara we had no visibility into the locations of our buses at our 15+ yards."

In addition to locating buses, the team relies on Samsara’s remote diagnostics. “In the past, if I needed to check if a bus had a check engine light on, I would need to have the bus held out of service and physically drive to a bus yard,” explained DiPrimio. Now, DiPrimio can remotely check on the maintenance status of all of his buses from the convenience of his office, which saves him valuable time and allows buses to be in service for longer. When he or a member of his crew go out to a yard to service a bus, they already know what engine fault to address.

Samsara’s intuitive dashboard has made a major difference for the maintenance team. “In a place where people are generally reluctant to embrace new technology, we had people coming up and asking for access to Samsara,” said Cunningham. “Adoption spread like wildfire once our garage guys found out they could use Samsara to actually see a bus’s exact location in the yard.”

In the past few years, several major companies have chosen to add offices and headquarters in the Cities of Boston and Cambridge—underscoring the need for a more reliable transit infrastructure. With transit ridership in Boston growing at a faster rate than any other major transit city in America in recent years, the MBTA is focused on elevating their services for their growing population.

Cunningham’s department is already noticing the positive influence that Samsara’s technology is having on reliability scores, and they expect scores to continue rising over the next few months.