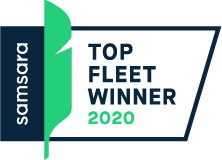 “The ability to get HD incident footage almost immediately was very important to us, and it has paid off. On-the-spot accident exoneration has resulted in significant reductions in both insurance and legal costs.”

Headquartered in Houston, Sprint Waste Services is a waste transportation and container rental company that supports the industrial and construction industries across the Gulf Coast. With more than 14 locations, 400 vehicles, and 300 drivers who collectively clocked 19 million miles last year, safety is a top priority for Sprint Waste. In search of the best dash cams for their fleet, they found that Samsara offered extremely high-quality cameras and a robust telematics system—all in one platform. Winner of the 2020 Samsara Top Fleet Award for Safest Fleet, Sprint Waste has taken its best-in-class safety program to the next level while also driving impactful cost savings across the enterprise.

Sprint Waste was formed in 2006 with a handful of trucks and just 15 employees. Since then, they have grown to more than 600 employees, with locations across Texas and Louisiana. Named one of the Houston Business Journal’s Fast 100 Growing Companies four years in a row, Sprint Waste works with some of the largest industrial plants and refineries in the country, including ExxonMobil, Marathon, and Phillips 66. They continue to win these contracts because of their breadth of services, stellar customer experience, and commitment to safety.

“Safety is not only important to us because we want our employees and our community to be safe—our customers won't do business with us unless we are safe,” said Dave Nelson, President of Sprint Waste. “That’s why we get the latest safety technology on our trucks, such as disc brakes, anti-rollover protection—and, of course, Samsara.”

After debating whether or not to implement dash cams for several years, Sprint Waste ultimately decided to make the investment because of the ability to utilize the videos to exonerate drivers and train employees, as well as an expectation that it would result in improved driver safety, fewer accidents and reduced insurance and legal costs. Chris Russ, Vice President of Collections, led the effort of testing several different vendors.

“We ran side-by-side comparisons on the dash cams, and it was clear that Samsara offered the best-quality footage by far. Plus, Samsara was the only system that we reviewed that offered both ELDs and dash cams together in one platform. That means we don’t have two different systems giving us harsh event alerts,” said Russ. “We all agreed that Samsara was the way to go.”

“We ran side-by-side comparisons on the dash cams, and it was clear that Samsara offered the best-quality footage by far.”

Rolling out dash cams to 300+ drivers and owner-operators

Getting driver buy-in on dash cams was a top priority for Sprint Waste. Many of their drivers had negative experiences with dash cams at previous companies and were understandably skeptical.

“When we finally decided to roll out dash cams, we wanted to do it in a positive way, and use it as an engagement tool rather than a hammer,” said Nelson.

The team leveraged their own executive leadership, as well as best practices from the Samsara Customer Success team, to help make the implementation a success. For example, President Dave Nelson installed a dash cam in his own personal vehicle before the fleet-wide rollout.

“The first weekend that I had the dash cam installed, I got a call from the Safety Department warning me to watch my speed. I shared that with the drivers, and they laughed, but it made a point," said Nelson. "Starting from the top, our owners and our leadership team were able to show drivers our goodwill by leading by example.”

In addition to their 300+ drivers, more than 60 owner-operators they work with also agreed to install dash cams.

“Putting cameras in owner-operators’ trucks was a big investment, but we felt like it was important because they're representing us,” said Nelson. “Safety is simply part of doing business with us.”

With the support of Samsara’s Customer Success team, Sprint Waste deployed Samsara across roughly 400 vehicles and trained more than 350 staff members—including drivers, safety managers, and mechanics—all in just 60 days. Within a few weeks, Nelson said their drivers were fully bought in.

“Very soon after we started installing the cameras, we had an accident that was not our fault and we were exonerated at the scene,” said Nelson. “We showed that video at every safety meeting, and light bulbs went on. After seeing how the footage could exonerate them firsthand, our drivers were fully bought in.”

Some fleets worry that drivers might quit because of dash cams, but Sprint Waste found that it was a positive change. In fact, a year after rolling out dash cams, Sprint Waste actually decreased their already stellar driver turnover rate to just 25.6%—more than three times lower than the industry average of 80-90%.

“We have a significantly better retention level than most companies in our peer group, and I think part of that is because of how we use Samsara,” said Nelson.

With more than 20 managers responsible for hundreds of drivers across 14 locations, accountability and consistency are key to Sprint Waste’s coaching strategy. They hold weekly (sometimes daily) safety meetings with drivers at each of their locations, and they keep a “Safety Calendar” of different safety activities, including mock Level 2 inspections. In addition, their entire leadership team has a safety call every Friday that Nelson leads. But before Samsara, they had little visibility into risky behaviors (like speeding, following too closely, and rolling through stops) until after they caused an accident—and they had no video of their own drivers to use for coaching.

Now, they use the Samsara Safety Inbox to proactively identify coachable moments and give drivers feedback using actual footage of themselves. Every day, Russ reviews the clips that are auto-uploaded to the company’s dashboard, updates the statuses (for example, “needs coaching” or “needs recognition”), and assigns each to a manager for 1:1 coaching. 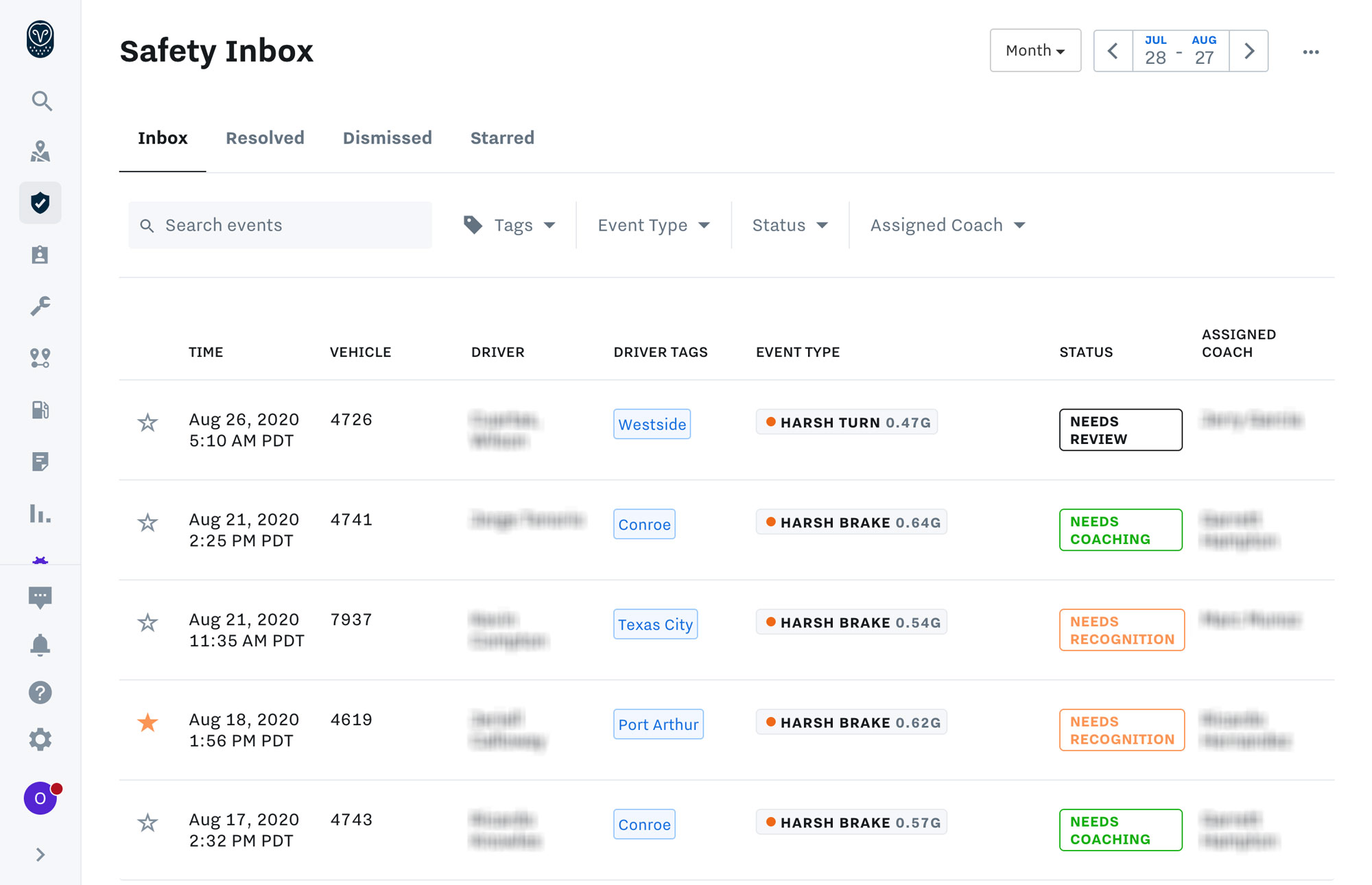 Russ also uses the Safety Inbox to “star” footage of great learning moments—whether negative or positive—to use for group coaching sessions during the weekly safety meetings.

“That's been really effective because the videos are of our own trucks and our own drivers,” said Nelson.  “People like seeing themselves, which is why Samsara has been such a powerful tool for coaching.”

Every Friday, Russ also uses the Coaching Effectiveness Report to report out key metrics and progress to the leadership team. Nelson said that after they show footage of a particular behavior, they see an immediate decrease in those types of incidents in the following weeks and months.

In fact, since deploying Samsara, Sprint Waste has decreased both the frequency and severity of accidents. In 2019, the company saw a 58% decrease in speeding incidents, 50% increase in miles per safety incident, and 50% decrease in average dollars per claim.

Potentially saving millions of dollars on insurance and legal costs

Any time a Sprint Waste driver is involved in an accident, the safety team does an exhaustive root cause analysis. Before Samsara, it would often become a “he said she said” situation, leading to costly litigation. With Samsara, Sprint Waste was able to exonerate drivers from more than half (52%) of all accidents in 2019, saving potentially millions of dollars in avoided lawsuits.

As soon as a crash occurs, Samsara sends a real-time email alert to the appropriate operation managers (based on the vehicle tags they have configured). Within minutes, footage from the incident is auto-uploaded to their Samsara dashboard, and they can easily send the video to the driver to share with law enforcement at the scene.

“The ability to get HD incident footage almost immediately was very important to us, and it has paid off,” said Nelson. “In previous years, a lot of those accidents would be inconclusive, and we would get sued. Now, we can exonerate our drivers on the spot. No lawsuit, no insurance claim. We have saved potentially millions of dollars by avoiding lawsuits as a result of exonerating our drivers with Samsara Dash Cam footage.”

Because their drivers are often on the road hours before sunrise and after sunset, Sprint Waste has also found that night vision is critical for exonerating their drivers.

“The video quality is outstanding for Samsara dash cams. Even when it’s dark or foggy, we can make out license plate numbers,” said Nelson. “We’ve been able to use nighttime footage to show another party was clearly at fault.”

Not all "he said, she said" situations are tied to crashes or harsh events. Sometimes, Sprint Waste wants to pull extra footage that's not associated with an incident and not auto-uploaded to the Safety Inbox. For those situations, they use Samsara’s Proximity Search and Video Retrieval features—which allow you to search by location to see which vehicles were nearby during a specific time frame and then pull footage from that time and place—to exonerate their drivers from false claims.

“We're picking up trash dumpsters from construction sites and personal homes, so it's not uncommon for someone to call up and say, ‘Hey, you damaged something on my property,” said Nelson. “With Proximity Search, we can go back and validate whether that did or didn't happen.”

“If not for Samsara and the safety improvements Samsara helped drive—exonerating drivers, reducing accident frequency and severity—our premium increase would have been closer to the 30% or 40% seen throughout the market, rather than 12%,” said Nelson. “We estimate that we saved approximately $500,000 in real, out-of-pocket insurance premiums at our last insurance renewal.”

For example, before Samsara, Sprint Waste’s maintenance managers had to manually plug a tablet into each truck to read the OBD codes.

“Now, we get default code alert emails remotely,” said Russ. “If there is a road call or a truck breaks down, it helps our mechanics prepare for what they need to bring. And with the real-time GPS tracking, they can immediately identify where the truck is.”

Plus, with the ability to capture DVIRs via the Samsara Driver App, Sprint Waste has been able to streamline the company’s driver workflow and further increase back-office productivity.

“Because our drivers can take a picture of an issue and attach it directly to the DVIR, our mechanics know exactly what to work on,” said Russ. “It’s a lot more efficient.”

“We're always finding different ways to use the information provided by Samsara… it’s driving so many efficiency improvements and cost savings even beyond safety.”

A partnership that continues to deliver

As a business that continues to expand each year, Sprint Waste values working with technology partners that can keep up with their rapid growth and help them stay ahead of the curve. Beyond Samsara Dash Cams and Vehicle Gateways, the company is looking into tracking their 800+ trailers with Samsara Asset Gateways. Russ noted this is another benefit of Samsara’s unified platform—the ability to scale across their multifaceted operations.

“Ultimately, one of the biggest reasons we chose Samsara is because we felt comfortable that Samsara would truly partner with us and listen to our feedback,” said Nelson. “With Samsara, we’ve been able to say, ‘Hey, if we had this functionality, it could really help us out.’ Samsara listens and takes our feedback into consideration.”