Dora and Joseph Schwebel started baking bread in their Campbell, Ohio kitchen in 1906. At first, they went door-to-door to sell bread to their neighbors. As their reputation for freshness and quality spread, the Schwebels turned to horse-drawn wagons and, eventually, trucks to expand from their local neighborhood into northeastern Ohio and beyond.

Today, Schwebel’s is headquartered in Youngstown, Ohio and has become a major distributor of baked goods in the Midwest. Schwebel’s uses seven production lines to bake three to four million pounds of bread and buns every week, operates 34 sales agencies and retail outlets across seven states, and services customers in a ~90,000 square mile area with its in-house delivery fleet.

“Everybody, from the people in the bakery to the people who make deliveries, is a company person. Everybody is part of the Schwebel’s extended family.”

Although many aspects about the baking industry and customers’ tastes have changed in the 112 years since Schwebel’s founding, one thing has remained constant — Schwebel’s commitment to excellence.

To ensure that customers receive products of the highest quality, every loaf and bun that comes out of the oven is delivered directly from Schwebel’s bakeries into the hands of its customers. Every day, freshly baked bread and buns are loaded onto 78 tractors and 105 trailers on-site at Schwebel’s bakeries in Youngstown, Hebron, and Solon. The baked goods are transported to sales agencies up to 350 miles away, as far as Syracuse, NY, Indianapolis, IN, and Morgantown, WV. The final leg of the journey is completed via 300 route trucks, which make local deliveries from each sales agency straight into the hands of eager customers. 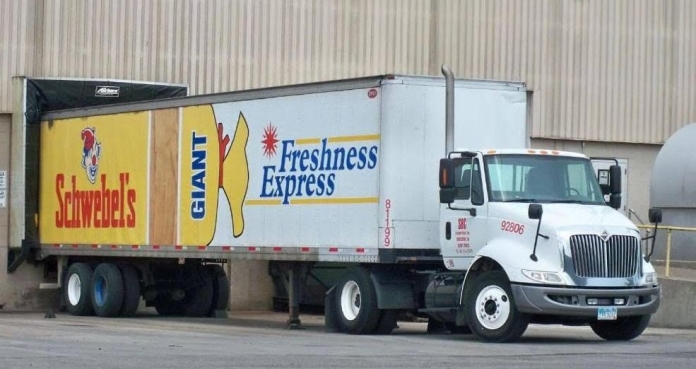 Orchestrating the on-time delivery of millions of pounds of product across such a large market area is no easy feat. Enter Adam Schwebel, Vice President of Operations and fourth-generation bread man. Adam oversees all manufacturing and distribution functions for the company and considers technology critical to align activities across 1,400+ employees, maximize driver productivity, and uphold customer satisfaction. Because of Adam’s leadership, Schwebel’s has long been a pioneer of fleet management technology; in fact, Schwebel’s adopted electronic logging devices over a decade before they were mandated by the FMCSA.

One of Schwebel’s challenges was maximizing driver productivity. It was not uncommon for routes to be delayed, as drivers made unplanned detours and stops on their way to sales agencies. Because Schwebel’s drivers are paid hourly, delayed routes result in higher costs and more unpredictable customer wait times. Schwebel’s previously relied on a passive GPS solution to track drivers’ routes; however, data from that system could only be synced via WiFi, which could only happen once deliveries were complete. As a result, the distribution team only saw drivers’ routes and stops at the end of the day. It was difficult to see when drivers deviated from their routes, where they tended to go off course, and how long they were delayed. By the time the distribution team noticed deviations, routes were complete and there was no way to make up for lost time. Adam knew that it was time to invest in a more robust solution.

Adam and the Schwebel’s team evaluated seven to eight GPS tracking solutions to replace their previous one, but none seemed quite right — they were either too expensive, too complex to use, or didn’t have the right functionality. As soon as Schwebel’s undertook a free trial of Samsara’s fleet management platform, however, they knew that Samsara was the right choice. “Samsara was the only system that got buy-in from both our managers and drivers," Adam explains. "The ease of use is excellent, and the reliability is proven.” Not only did Samsara provide the live data that Schwebel’s needed to drive efficiency across its entire fleet operations, but it was also affordable, reliable, and easy to use.

“We used to get a lot of questions from sales agencies, asking us when a truck was going to arrive. Now, we can proactively let them know.”

With Samsara vehicle gateways (VGs) installed in every Schwebel’s tractor-trailer, Adam and the distribution team now have live-to-the-second GPS tracking of the fleet. When dispatchers notice that a delivery is not going according to plan, they take action in two ways:

“Samsara is an Investment That’s Paid Off in Spades”

From the time the first VGs were installed, Samsara has helped Schwebel’s smooth its operations by increasing visibility between drivers, dispatchers, and sales agencies. Dispatchers no longer spend valuable time on the telephone calling individual drivers and sales agencies; they can see at a glance when a truck is supposed to arrive, and communicate that information immediately. Customers are more satisfied because as drivers perform better, nearly 100% of deliveries are made on-time. “We are paying less than what we paid before," says Adam, "and the benefits are dramatically better.”

Adam offers these parting words of advice to other businesses who may be considering an investment in fleet management technology: “You should do a trial. Do a trial of everything. Put the units in the trucks with your best drivers, and talk to them. Find out what they like and don’t like. As your team starts seeing all the systems, I think you’ll find that Samsara is the best. That’s what happened in our scenario.”

“I knew from the early stages that Samsara would be a tremendous asset to our company. It’s been a great experience the entire way through, and I haven’t looked back.”

Logistics Warehouse relies on Samsara to help them gain better visibility into their sites and improve operational efficiency.

O'Neal Steel relies on Samsara to constantly innovate and grow alongside their rapidly-changing business while providing a...

Certarus chose to partner with Samara so they could gain real-time visibility into their operations to consistently deliver the...