“If you want a system that’s going to work, this is the one.”

Tumino’s Towing traces its origins back to 1981, when founder John Tumino started the business with a single tow truck to his name. Since then, Tumino’s has added more than 100 vehicles to its fleet and expanded to five locations in the greater New Jersey area. Now operating across much of the Eastern Seaboard, Tumino’s specializes in commercial towing services for trucks, tractor trailers, and buses. 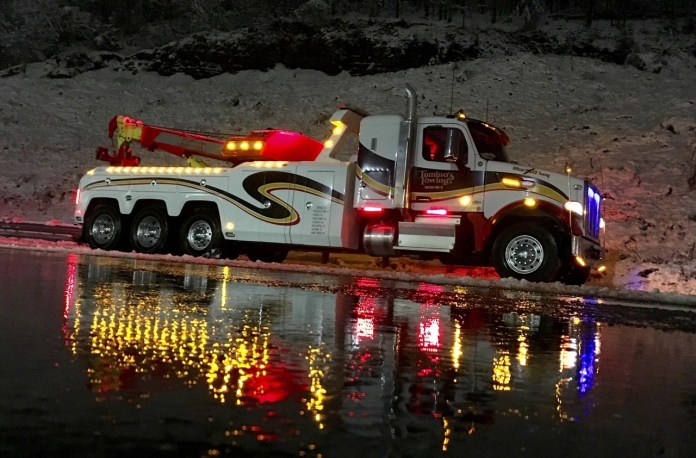 But for all its success, Tumino’s humming business nearly hit a roadblock when it came to meeting Hours of Service (HOS) regulations under the ELD mandate. The company turned to its long-time GPS provider to make sure they were compliant, but the product simply didn’t function properly. “We spent a lot of time and effort getting their equipment into our trucks only to find out it didn’t work,” CFO Larry LaManna recalled. “It turned out to be the biggest nightmare ever.”

With the ELD mandate deadline quickly approaching, LaManna was in need of a simple and effective solution. That’s when he turned to Samsara.

In July 2018, Tumino’s Towing installed Samsara vehicle gateways to electronically record its drivers' HOS in regulation with the ELD mandate.

Not only did this ensure Tumino’s fleets were ELD compliant, but it offered real-time visibility into drivers’ routes and overall improvements in operational efficiency. This access allowed Tumino’s Towing to accurately bill drivers for their time and mitigated the risk of potential Hours of Service violations.

Samsara dash cams store up to 60 hours of drive time footage; however, the cameras also take still photos every 2 minutes. Even though the call didn't come until after the stored video footage was past retrieval, the team was able to use the images to easily prove their innocence. “We were able to get still pictures and it proved to both insurance companies that it wasn’t our driver’s fault,” LaManna said.

Situations like these occur frequently in the towing industry. Installing Samsara dash cameras, LaManna asserts, has saved Tumino’s from a number of insurance claims each year. “It’s always a ‘he said, she said’ scenario and having a camera has helped.”

The pictures were later circulated among Tumino’s drivers to highlight the benefits of dash cameras, garnering buy-in among those who might have initially been more uncertain about them.

Tumino’s drivers take part in a monthly safety and performance bonus program that takes into account things like safe driving and attendance. Since using Samsara, LaManna mentions there have been fewer instances of unsafe driving.

Speeding occurrences, according to LaManna, have significantly decreased since using Samsara. “They have dropped dramatically,” LaManna said. “Since we got Samsara there are almost none. I might get a speeding alert once every two to three weeks. If they were constantly speeding, I’d get one every minute.”

A lot of this can be attributed to the fact that LaManna uses camera footage as a starting point for important conversations that help employees operate vehicles more safely and correct dangerous driving. These are much more impactful than a generic or dated safety video.

“When we find something that’s an issue, we’ll speak to a driver. We’ll bring them in and show them,” LaManna explained. The footage provides a jumping-off point for driver coaching or training. Without it, Tumino’s would have little visibility into driver habits and thus fewer opportunities to correct unsafe driving.

Not only are they good for coaching, but the cameras keep Tumino’s drivers accountable.

“I saw a guy looking down at his phone, and he tapped somebody in the rear,” LaManna said. “It was brought to his attention, and I'm pretty sure he won’t be doing that anymore.”

At Tumino’s Towing, customers are billed by the hour. That means it's critical for Tumino’s to have a system in place that accurately captures when drivers are working and when they’re taking breaks. “I'm not going to bill a customer if my guy stopped for lunch for an hour and a half,” LaManna said.

Tumino's leverages Samsara's real-time GPS to access live vehicle locations. This gives Tumino’s visibility into where its drivers are at any given moment and provides them with trip histories so they can review what routes drivers took or if they made any stops along the way. Not only does this turn billing into a science, but it also provides documentation in case a customer disputes a charge.

Plus, when LaManna gets a job request, he’s able to send out the nearest driver to complete the task. “We have 100 trucks and I want to give a call to a guy who’s close to where the call is,” he said. This helps create a much more efficient customer service experience and decreases any unnecessary fuel costs Tumino’s might otherwise spend on getting a truck to the job location.

Samsara provided Tumino’s access into its operations and became the solution—and partner—it was looking for. “If you want a system that’s going to work, this is the one,” LaManna said.