“I don't think that I would ever want to go back to the way it was before. Samsara has empowered us to see things the way they need to be seen.”

Headquartered in Naples, Dolphin Transportation chauffeurs passengers across southwest Florida in a 75-vehicle fleet of luxury sedans, SUVs, and motorcoaches. They rely on Samsara to manage their fleet efficiently, gain visibility into driver safety, and enhance their customer experience.

Consolidating four vendors into one platform

Before discovering Samsara, Dolphin Transportation struggled with a problem all too familiar for passenger transit fleets: too many vendors.

They had one vendor for in-cab WiFi, another for radio, and another for HOS compliance, which Operations Manager Chris Boynton said was “like an à la carte menu — you buy into this, you buy into that.” They also had two different GPS systems (one for small vehicles and one for large vehicles), which made it difficult for dispatch to find key information quickly.

“A dispatcher who was trying to figure out where somebody is on the fly would have four or five screens open,” said Boynton. “It just became cumbersome.”

Boynton said they chose Samsara because it simplified their workflows. With Samsara, Dolphin Transportation got real-time GPS tracking, in-cab Wifi, dual-facing dash cams, and an FMCSA-approved ELD solution—all in one easy-to-use platform.

“We ended up going from four different vendors to handle all these different facets to Samsara, which could do it all in one suite,” said Boynton. “It has saved us a lot of time and simplified our lives, which is where the real value is for us.”

“We ended up going from four different vendors to handle all these different facets to Samsara, which could do it all in one suite.” 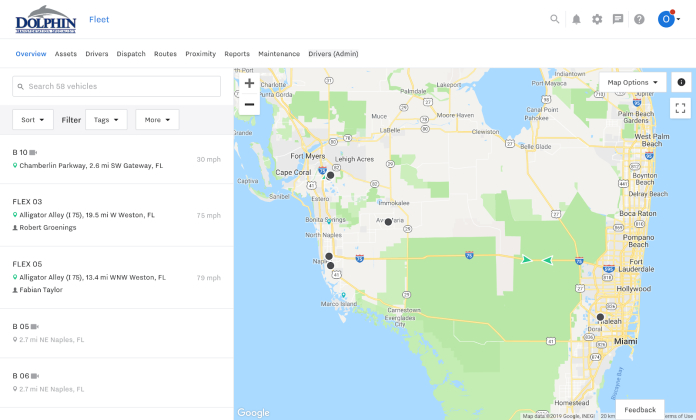 Even though they implemented Samsara in the middle of their busy season, Boynton said it was a straightforward process. When their vehicles returned to the shop, they were able to install the hardware quickly and easily, ensuring they were back on the road with no delay.

Boynton has always had an eye on safety—partly because he has a background in driver training, and partly because safety is a key factor in keeping Dolphin’s customers happy and winning new business. But before installing Samsara dash cams, Boynton said he had very little visibility into how his drivers were behaving while on-the-road.

“I didn’t realize we had a problem with railroad crossings until—just by coincidence—there was a harsh event that happened to take place right before the railroad tracks,” said Boynton.

Because Samsara automatically downloads dash cam video of harsh events, Boynton was able to view HD footage of the incident within minutes and saw that the driver “ran right through the track” without stopping, a violation of federal safety guidelines.

Inspired by the incident, Boynton used Samsara to create a geofence around railroad tracks in the area and set up an alert so that he would receive an email and text whenever a driver crossed them.

“It was eye-opening. I showed a bunch of our drivers the videos, and now everybody stops at railroad tracks,” said Boynton. “The dash cams are a multipurpose tool for safety—not just for seeing what’s going on, but actually for training as well.”

“The dash cams are a multipurpose tool for safety—not just for seeing what’s going on, but actually for training as well. ”

“Without Samsara, we wouldn’t have ever known that one of our drivers was permitting passengers to stand in a bus while the vehicle was in motion,” said Boynton. “All it takes is one simple accident to put you out of business. Samsara helps us reduce our exposure and provide better safety for our customers.”

“I have a guy that was getting a lot of complaints. Now, I haven't had a single complaint in six months. He's improved a lot,” said Boynton. “Samsara has definitely made a big difference.”

Training new drivers can be time-consuming and expensive, especially if your fleet chauffeurs passengers to and from highly-regulated areas with complicated roadways, like airports or ports of call.

Boynton is no stranger to this challenge; he hired roughly 20 new drivers during their peak season this winter. But with Samsara’s HD Dash Cams, he was able to train them three times faster.

“Before we had Samsara, we would train drivers by sending them out with another driver to run the routes. It would take three weeks to get people really proficient,” said Boynton. “Who’s got the time—especially when you’ve got a busy season—to spend all that extra time on training when you need your guys out on the road?”

Now, Boynton uses Samsara’s video retrieval feature to create training videos of complicated, faraway routes. After new drivers complete local training, Boynton simply sits down with them in the office and goes through a few key hyperlapse videos, coaching them on which highways to take and which turns to make. He also made all of the hyperlapse videos available in an online library, so drivers can rewatch routes on demand.

“Now I have a training DVD that I can hand out to everybody and say, ‘Hey, when you guys go to the Port of the Everglades, check these videos out. There are two video files; one is for when you have to go around the tanks, one is for when you don't,’” said Boynton. “It's become a huge time saver.”

Boynton said that it now only takes about 1 week to train a new driver, whereas it used to take 3 weeks.

“Eliminating cause for error—just through a little bit of advanced training with something as simple as watching a video—has saved a lot of hassle,” said Boynton.

Samsara has changed the way that Dolphin Transportation operates, helping them better achieve their mission of passenger safety, comfort, and reliability.

“Before, everybody thought they knew what was going on. But with Samsara, we have developed new systems, trainings, and ways to supervise that we never did before,” said Boynton. “It changed the way that we run our business.”

For example, Dolphin Transportation uses Samsara to improve the reliability of “10-minute out” calls that many of their customers and partners want. When a customer requests a “10-minute out” call, Boynton simply logs into his Samsara dashboard and sets up a geofence alert around the pickup or dropoff location.

“If somebody requests a ‘10-minute out’ call, we may forget. But with Samsara, the dispatcher gets a notification via text or email that reminds them to make the call,” said Boynton. “This way, we don’t miss it at all.”

“Live Sharing is a big feature that has improved our customer experience, especially for groups who want to know where their vehicles are,” said Boynton. “Being able to share live location information with our customers via a link has saved us a lot of hassle.”

“Being able to share live location information with our customers via a link has saved us a lot of hassle. 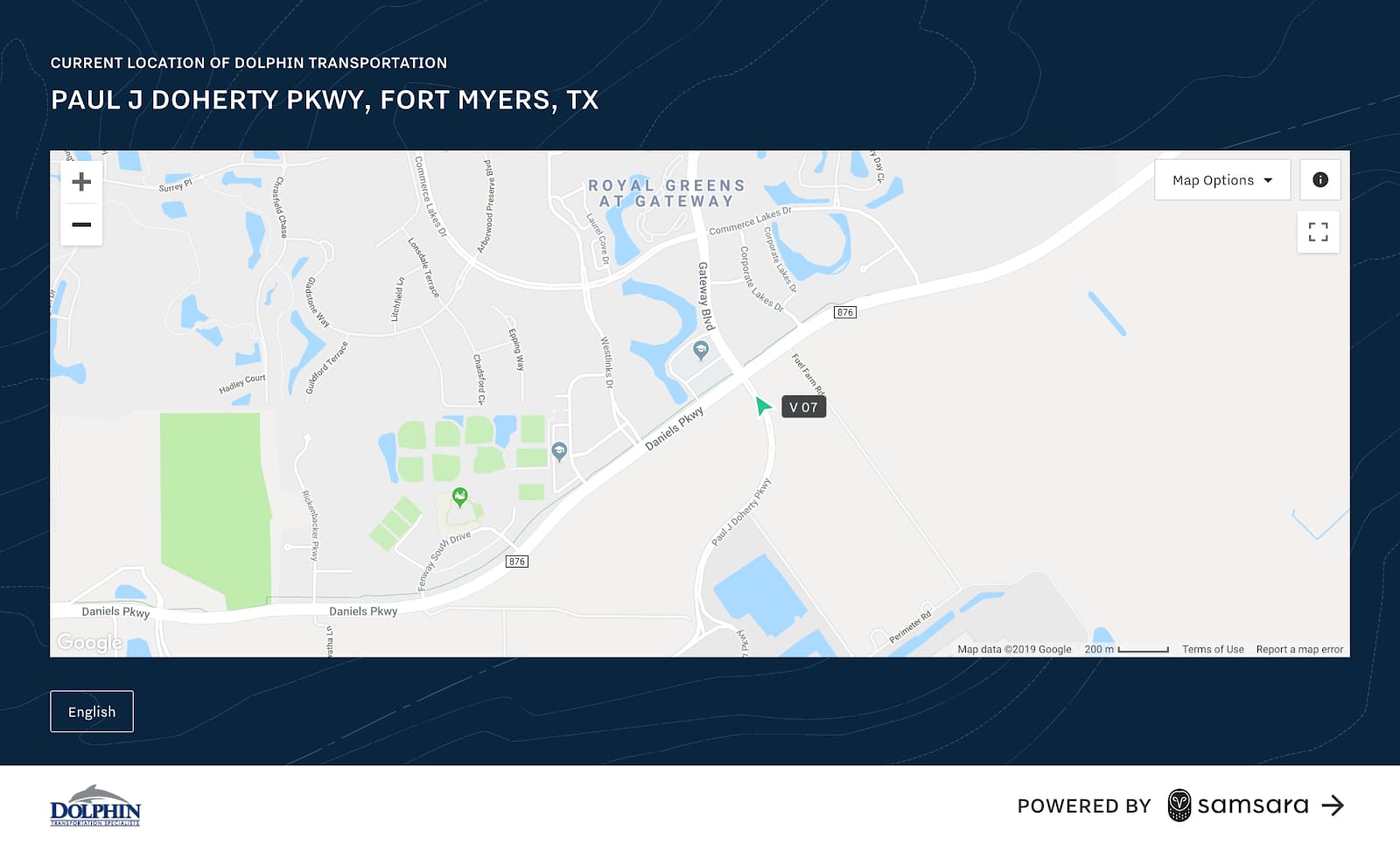 Ultimately, Boynton said that the real value of Samsara is how much it has improved the efficiency and quality of his operations — and how much it has simplified his life.

“I don't think that I would ever want to go back to the way it was before. Samsara has empowered us to see things the way they need to be seen,” said Boynton.